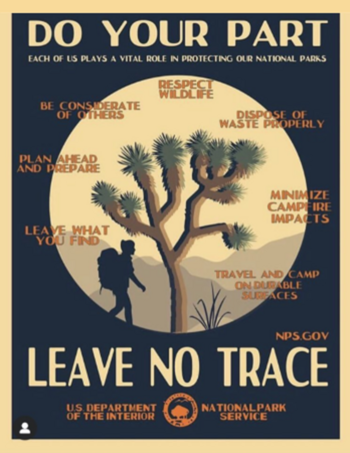 "Our community respects the environment. We are committed to leaving no physical trace of our activities wherever we gather. We clean up after ourselves and endeavour, whenever possible, to leave such places in a better state than when we found them."

Leave No Trace is a very straight forward principle. When you walk the site during and after the event MOOP is usually very evident. Success in preventing and managing MOOP can be equally evident.

One of the great debates in Burning philosophy and practice, is whether Burns should take any steps to help participants and Theme Camps manage MOOP. The debate recognises that every step a Burn organisation might take to assist in managing MOOP might have the effect of reducing the sense of responsibility for avoiding and managing MOOP among Theme Camps and participants generally. To some extent this expectation is based on a certain view of how people and groups behave - but it has to be acknowledged that this is observed experience from many Burns.

The Burn is an incubator and teacher of ideas and practices that we should carry into the wider world. Asking Burn participants to focus on, and conform to, best LNT practices at the Burn is the starting point. Sometimes though that becomes the sole focus of LNT. It is important that Burns also communicate to participants that Leave No Trace is a model for the global community that is challenged by unparalleled threats to nature and our own survival. One approach is to use language and give guidance to Burn participants in such a way that local actions and global actions are seen part of one continuum. For example by using messaging such as:

Leaving No Trace (LNT) is about more than picking up litter. It is about:

A big call, but it only requires small steps:

The Burning Man Principles and Community provide no specific guidance on what 'ethical principles' should guide a Burners (or a Burn Organizer's) view towards and application of the Ten Principles. The 'purist' might hold that Burns should not charge money, and in fact should not be organized by anyone - but in fact organized by everyone. This viewpoint finds its nearest expression in the Rainbow Gathering movement. Others would hold that the Burn is an opportunity to showcase 'ideals', but the showcase has to exist in the 'real world' and comply with the economic and legal constraints of the real world as it stands now while we work to bring the 'real world' into line with our 'showcased world'. Some will hold that 'the pure is the enemy of the good', and others will say, "If you want to do anything, do it now, without compromise or concession, because you have only one life." ~ Gao Xingjian

It is apparent that James did not use random abstract forms when he created the pictograms for the 10 Principles. He hasn't provided a commentary on them, perhaps deliberately in order to allow each of to find our own meanings, and leave it open to us to see new meanings in them as our understanding of the 10 Principles expands and evolves. It might be noted though, that more than any other pictogram, the LNT pictogram has a stunning effect when animated in a rotating motion.